Cagayan River — the longest and the largest in the Philippines — is the drainage of Luzon. It’s like a mighty rupture that splits Luzon in two. In 2002, I had the chance to cross this watercourse in what was to be my most gripping 30-minute boat ride ever. From the banca terminal they call Dap-pà to the winding estuaries of Aparri delta, we cruised in the dead of night. Even locals don’t embark in total blackness. The darkness made me see things on the nipa palms lining the riverbank. A hint of the Mekong Delta scenes in Apocalypse Now.

Today I walked this town again. Nothing has changed. Cagayan River still ends where Pacific Ocean meets South China Sea  — in the Babuyan Channel. I see they have come up with a fitting caption for Aparri now: “Where The River Meets The Sea.” 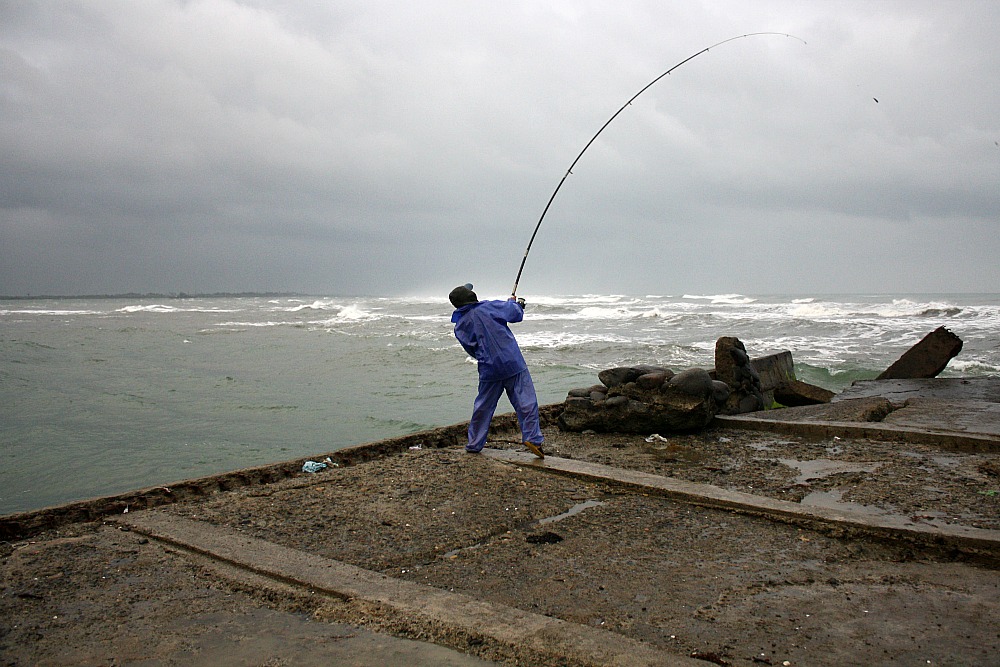 First in my order of business is to catch the aramang sun-drying activity on the jetty. Aramangs, the pink, soft-shelled shrimps are Aparrianos’ key merchandise. How they blanket the place with these crustaceans is simply picturesque. No action today however. The weather was as cheerless as the black sands of Aparri. What I found instead was a bunch of pescadores in their usual Monday rush. 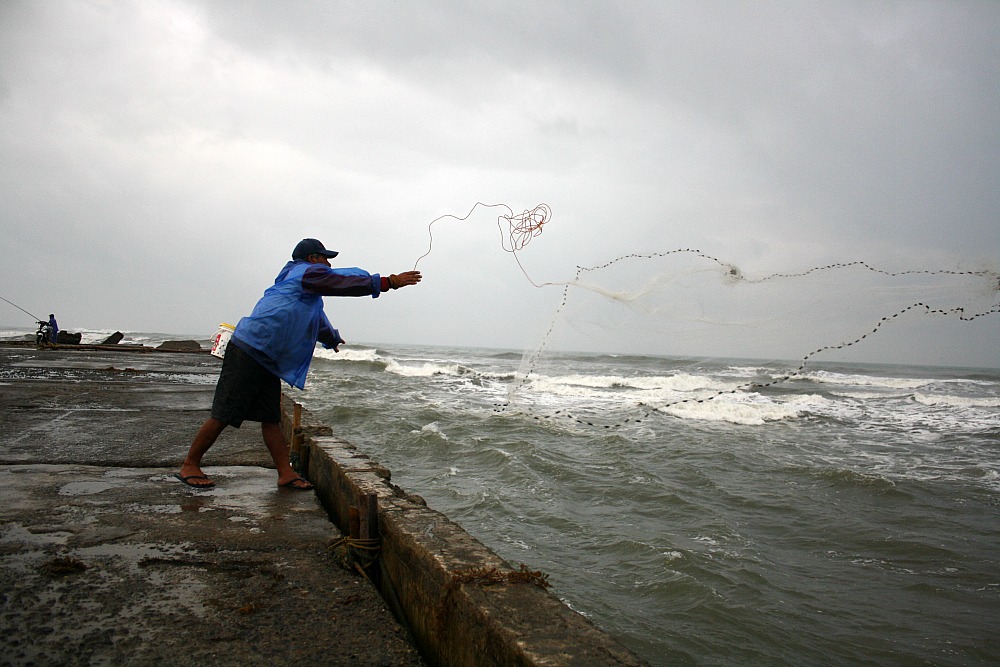 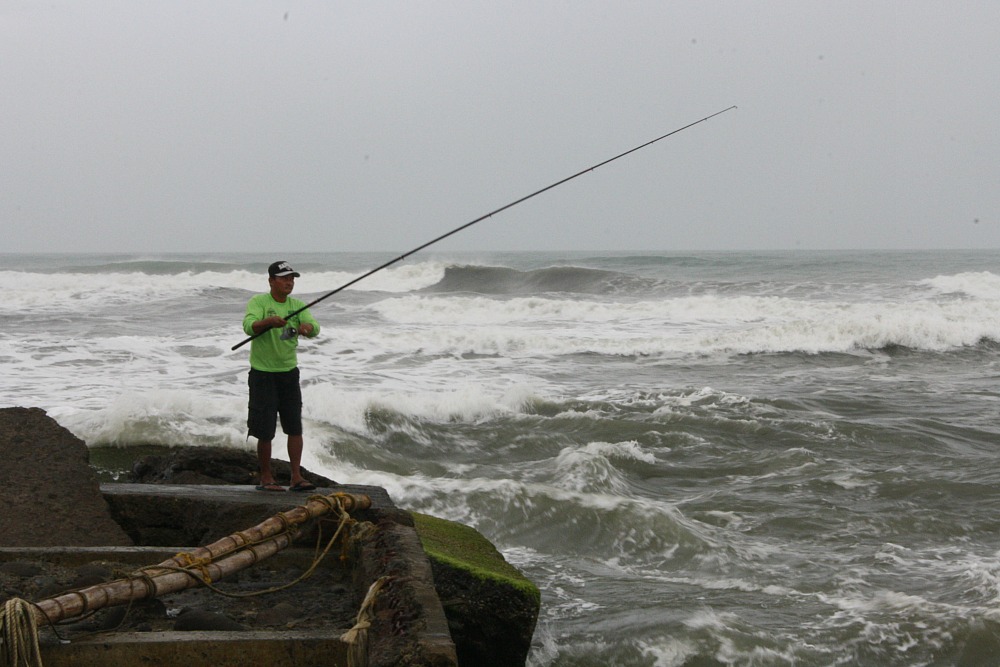 The black sands of Aparri may not be very appealing to beach-goers. But the silt contains minerals making it excellent quarrying grounds to mining companies. Recently, the town was in uproar over black sand mining along the Cagayan River and on the Punta and San Antonio coasts. Enraged Aparrianos fought against these magnetite extractions, to the extent of some residents paying with their lives.

It’s mind-boggling how the government can decide in granting mining firms the liberty to destroy the environment and create a disaster-risk setting. Today — thanks to Yolanda’s lessons — the government has come to their senses, and stopped all mining activities in the area. 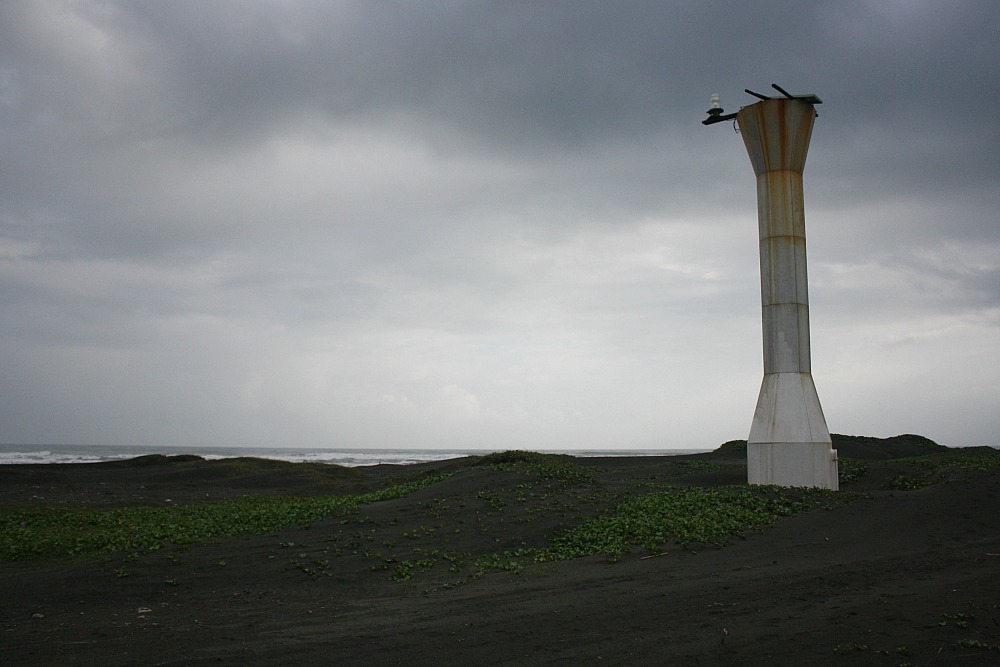 Anywhere in the heart of Aparri is a walking distance. The central hub couldn’t be any bigger than a square kilometer. From the jetty I made an aimless walk and immediately found myself already nearing the town exit.

I have wandered around here long ago, knocking about, intoxicated by the powerfully smooth nipa palm wine or lambanog. The Filipino’s wicked version of tequila. At a dreadful 90% proof! A full glass in the morning is enough  to keep me feeling good the whole day through. (Another glass would keep me under the table. ) The old folks here — particularly those on the outskirts — are the more notable lambanog drinkers. They have associated the wine with long life. While the younger drinkers, or those in the township, have switched to the now-preferred, and another dreadful, Red Horse Beer.

When in Aparri,  drink what the Aparrianos drink. As a self-confessed San Miguel Pale Pilsen lover, I can take just about whatever alcohol is on hand at any given place. Traveling and drinking goes side by side for me. It is important to feel the spirit of the place. Experience-wise, I have made a lot of friends this way.

Not long after I tiptoed my way to the centro, the town has already awoken. Slow, almost inoperative. This is Monday to them. A fleeting representation of its sluggish economy? I don’t think I see Aparri anywhere in the economic map. How is progress in this part of the country? Like a dream? Whatever happened to the proposed international port, where Aparri is the principal port of entry? Or Executive Order 707’s “total development of Cagayan Special Economic Zone?” Maybe I haven’t been looking around hard enough. Being one of the earliest international trading post in the country (which involves Spanish and Japanese traffic) it’s a blow to see Aparri lag behind many other municipalities in the region. 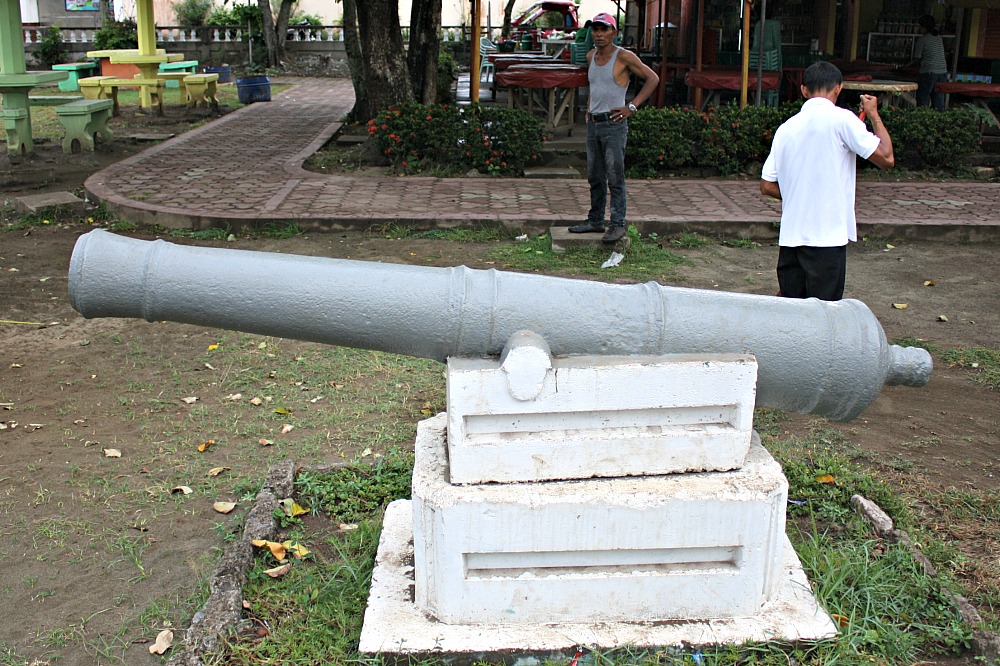 The Japanese had been doing business in Aparri even before the Spaniards came. When the Japs returned one day in the 20th century, they came horribly with a whole new different mission — East Asia conquest. And unknown to many, Aparri became their advance landing points in Luzon. However, local history books don’t say much about Aparri during the war.

In my idle wanderings around here I was intrigued by the absence of old structures, ancestral houses, antique churches and everything. Old towns normally possess legacies like these. It is by and large the identity of a place and its people. The spirit and the soul. But I find none of these in Aparri. Only a few art deco-looking designs or some contemporary brutalist architecture.

While I spotted a few antique abodes and basilicas in the neighboring towns of Lal-lo and Alcala, and with much more in the next door Ilocos region, how is it that Aparri has barely a trace of its past? Was the town completely wiped out during the war? Did the Ybanags failed to preserve their heritage structures, if there ever was? What is the real story behind the cultural heritage in this far off borough? I might not be burrowing hard enough. 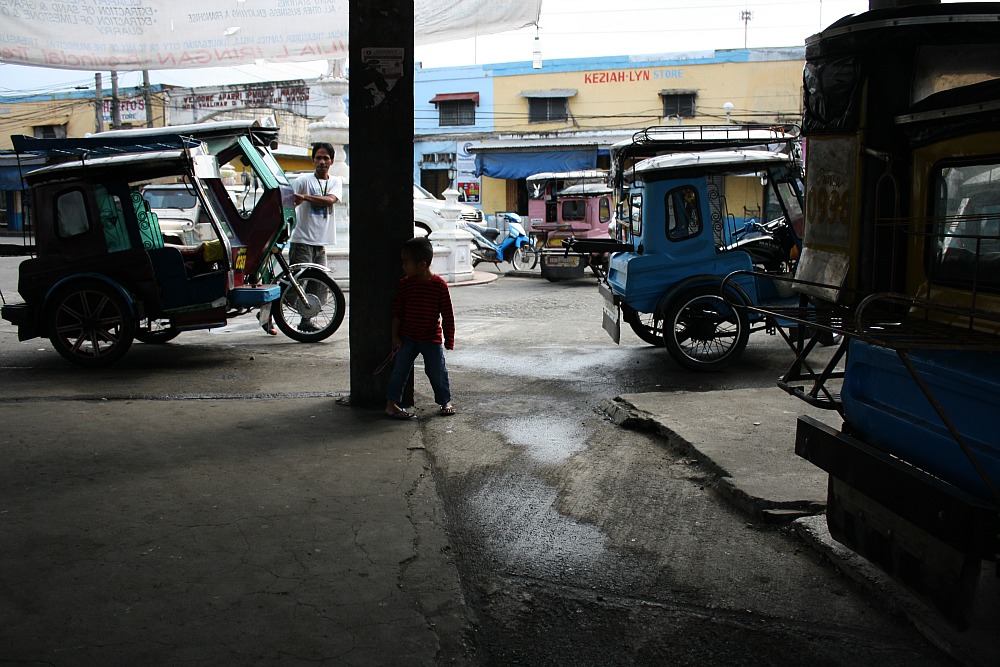 Confined by the Cagayan River to isolation, Aparri West is generally a barren place, impoverished and poverty-stricken. A perfect breeding ground for insurgency.

For every landings here in Dappa, it’s usually a boat-load of locals from the West. There’s more business here than from where they come from. 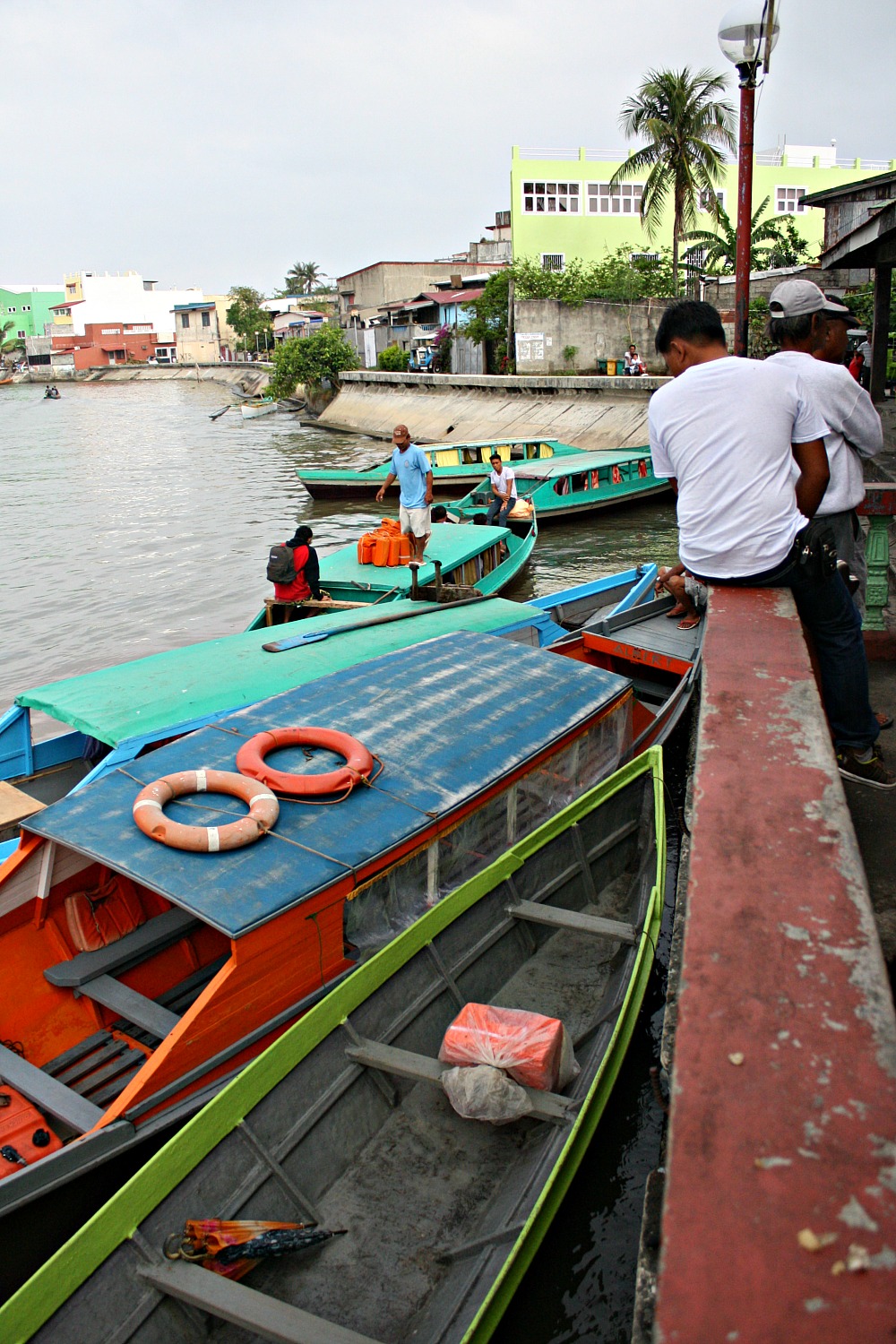 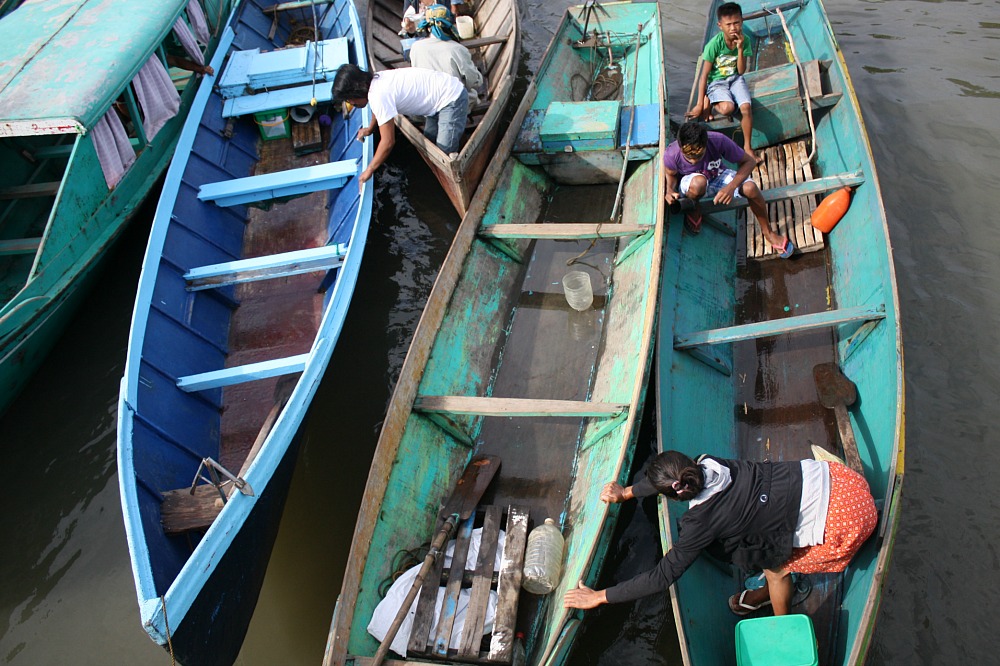 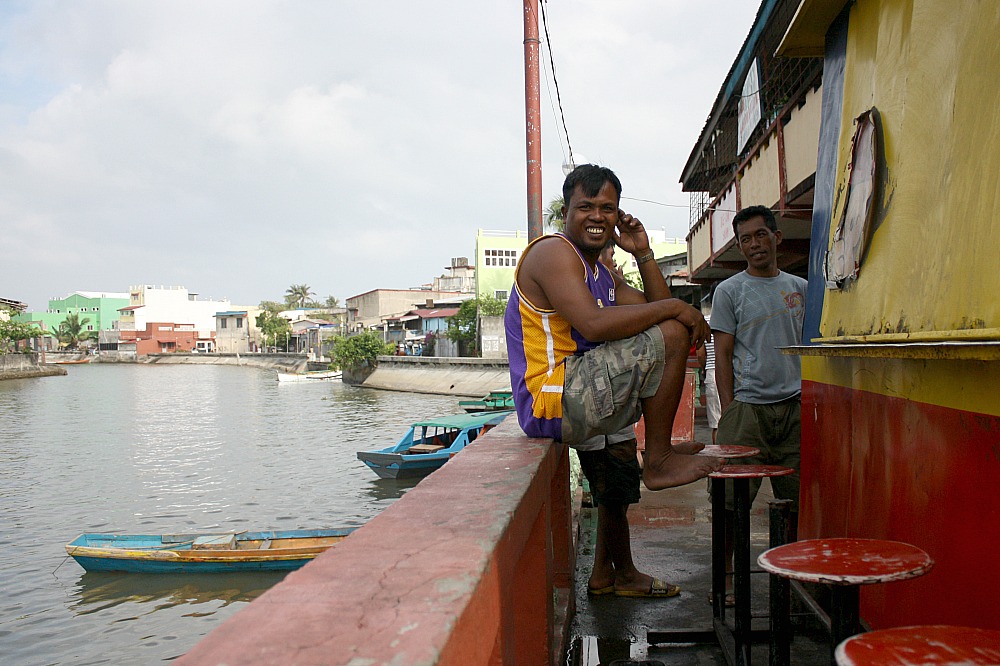 Adjoining Dappa terminal is the public market. I see hauls of fresh produce, excellent for dinengdeng (a jumble of green veggies cooked in bagoong) being unloaded. Cheap and easy to prepare, dinengdeng is the north’s best-loved humble cuisine. No question there. Ilocanos and all northerners are identified with bagoong and dinengdeng. They say this duo is the force behind every hardworking Ilocano.

It’s not like strangers will grasp the bitter-salty taste of dinengdeng in one bite. It takes a revolution in one’s taste preference to come to appreciate the dish. To me, it’s heavenly. Especially when complemented with udangs or big-headed freshwater shrimps collected from the Cagayan River; gakka (seashells raked from the coastline) and — lest I forget — a pot of good papaitan.

To the hard-to-please, there’s always a Jollibee among a number of convenience food outlets around. Aparrianos have come to take in the taste of Metro Manila.

Since a lot of fast-food outlets have already sprouted in the centro, it’s only a question of time now for the Mall Invasion to take place. (I heard SM is set to open 30 branches more somewhere in the archipelago. Madness.) Aparrianos should be thankful the “mall wars” hasn’t reached their doorstep yet. The Robinson’s – SM omnipresence here would be an atrocity to small businesses. Although sometimes people mistake progress by the enormity of their shopping malls.

Progress in Aparri — as in all other remote districts in the Philippines — is at a snail pace. It is faster for the Cagayan River to wear away the whole town than for development to steamroll here. Aparrianos are typically hardworking people, but the same ball and chain, POLITICS and more of it, remains the impediment to their rise. 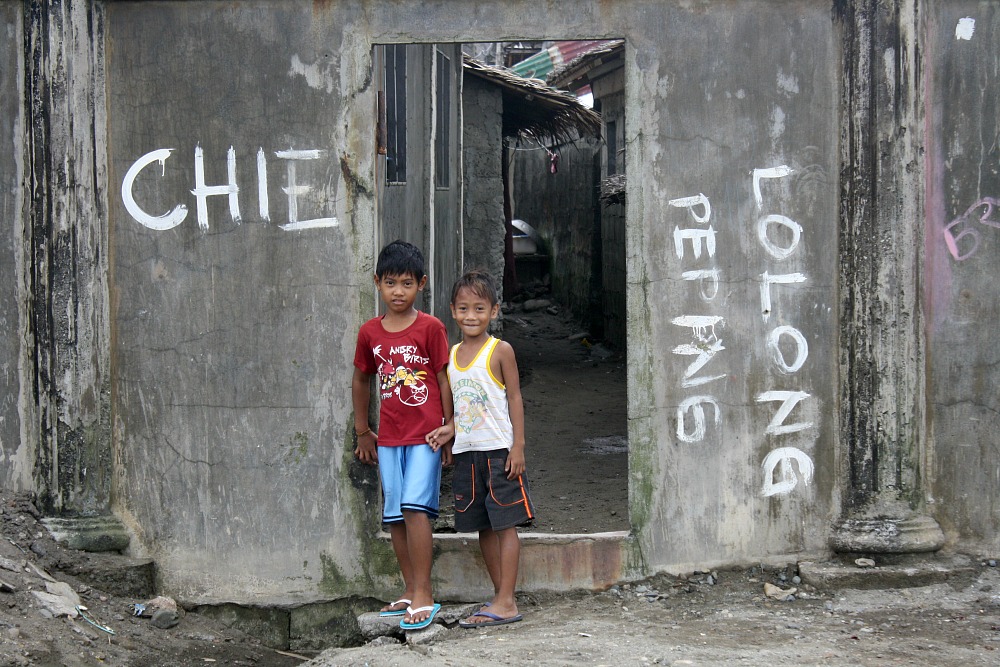 The day I left Aparri, I took a one last stroll along the shore. Rather than bidding people goodbye. I’m not anti-social, I’m just pro-solitude.

It’s the healing power of the ocean. 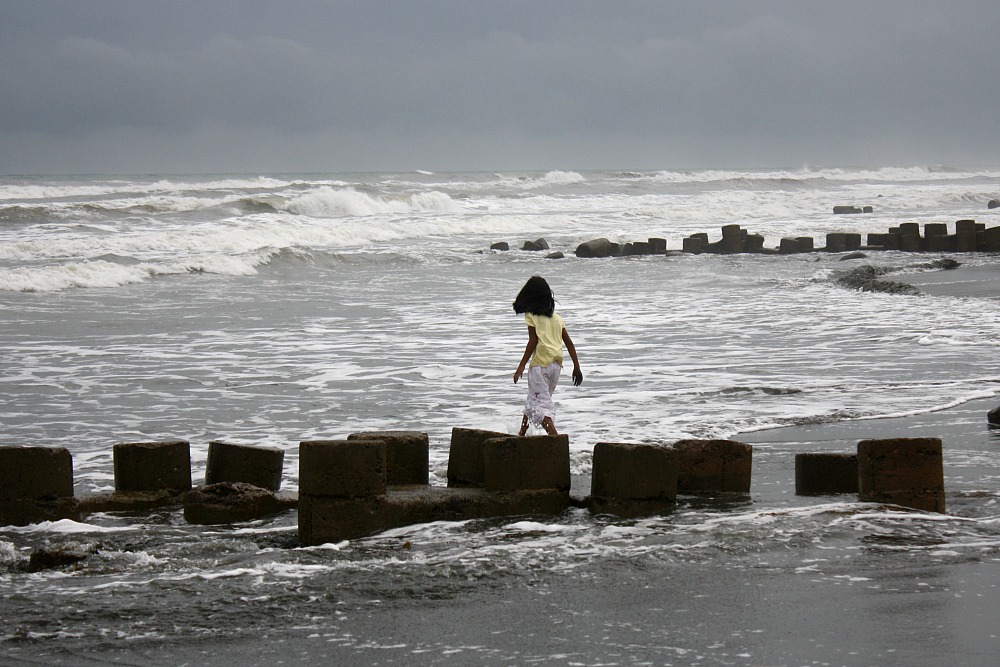 19 thoughts on “APARRI: JOURNEY TO THE EDGE OF LUZON”